Review of a Paper for Green Skills Research Considerations

In the considerable body of literature on the green economy there are some papers that skills researchers will in my view find particularly useful, even if these papers do not refer to research or to skills. This text by Peter Ferguson is one such paper. It provides very useful perspective, as well as an excellent set of references, and food for thought on how exactly a green economy is to be achieved.  It provides the reader in green economy and related skills with analytic frameworks with a strong political economy orientation; historical timelines (see the figure accompanying this post for an adaption and expansion); conceptual clarifications; and a discursive strategy for working with the concepts, making this both a useful orientating text and a paper that can be analysed for its implications for particular research and skills planning projects.  It will be a particularly useful read for those who have already started to work in the field, but have not been deeply immersed in it.

Dr Ferguson is an Australian academic lecturing in politics and policy studies. His research focusses on the political barriers to moving toward a socially just and ecologically sustainable global economy. His central argument in this paper is that the green economy discourse may have the capacity to animate a transition away from conventional forms of growth to a ‘post-growth’ future where environmental sustainability and social justice is more likely, provided that:

Ferguson starts off by placing the concept of the green economy in a historical context, noting that it has been 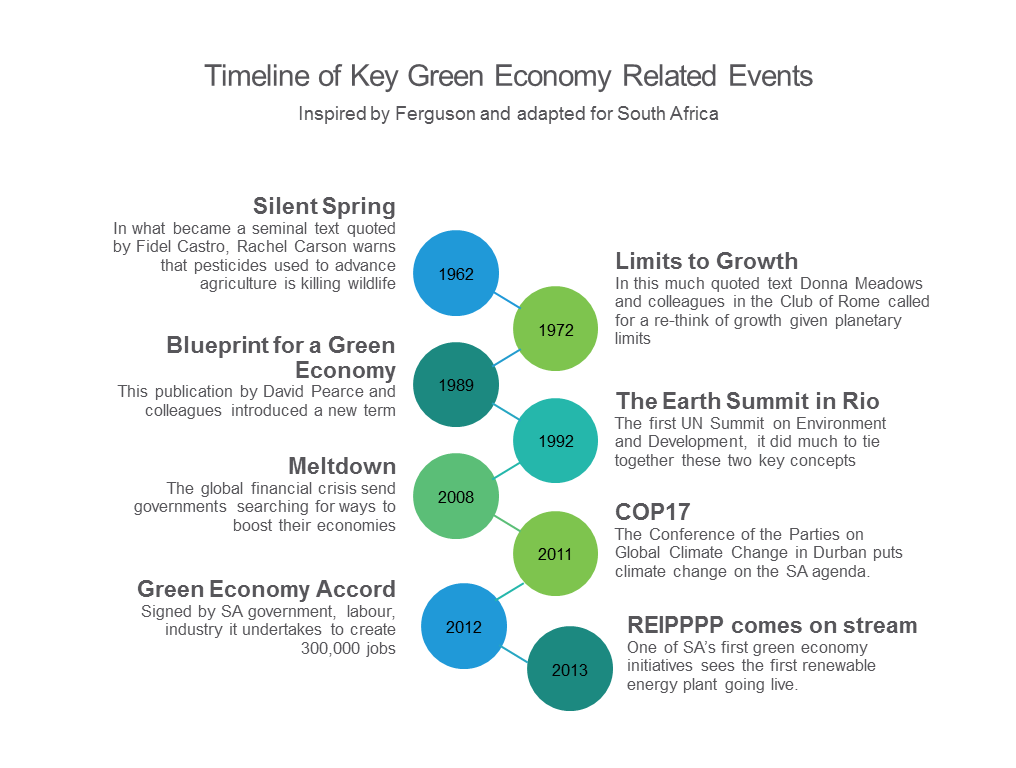 around since Earthscan published Blueprint for a Green Economy by DavidPearce and colleagues in 1998. He links the rise into prominence of the concept of ‘green economy’ to two factors: (1) the global economic crisis in 2008 which led to a search for new opportunities to boost national economies, and (2) disillusionment with the concept of ‘sustainable development’. Ferguson suggests that the sustainable development discourse has failed to reconcile (the three pillars of) economics, environment and social development; and that it is too vague and imprecise (on what should be sustained, how and for whom) to drive strong policy and action – citing the lack of progress reflected at the Rio+20 conference as evidence. He further argues that the green economy discourse is more focused and thus potentially more effective in driving strong environmental policies.

However, Ferguson is also under no illusions about the limitations of the green economy concept, and notes that it currently comprises “a disaggregated and contested discourse” (p.26). He provides a number of framings for understanding the tensions, inconsistencies and ambiguities in this discourse, evident for example in how the concept is used by agencies like UNEP, the IMF, the World Bank and the US government. The analytic frameworks he sketches out include a framing of green economy approaches as (1) Keynesian; (2) green growth; or (3) eco-industrialisation based on technological innovation. Another framing comprises different green economy approaches along an ecological modernisation spectrum (based on the work of Christoff, 1996 and Paterson et al., 2006) and a third framing, of the green economy discourse as weak, transformational, or strong.

The author reviews the limitations of conventional approaches to economic growth and develops the argument that environmental and social justice benefits will only be achieved if such growth (and associated indicators) are discarded for new ways of measuring and achieving well-being. He concludes that in some instances, though, growth might be needed, and that the way forward is not a simple either (economic) growth or no (economic) growth (which will in any case be difficult to achieve politically), but (economic) growth in some places and no (economic) growth in other places.

Ferguson then brings in a discourse analysis lens in the second half of his paper, arguing that a polemical discourse such as ‘no growth’ is politically unwise, and that a more considered approach would be a discursive re-articulation of the key concepts involved. The concept of green economy holds this potential, because the notion of the economy is a widely adopted ‘pivot term’ on which a ‘turn’ can be achieved, for example by coupling it to changing notions of what wellbeing (including wealth) and environmental and social security mean, and then with time, as these terms are used more widely, and the associated concepts start shifting, it is also possible to shift or re-articulate the notions of ‘economy’ and ‘growth’ – as if they are being “spoken anew”. A sense of Aussie passion comes through in the idea of subversive re-articulation between radicalisation and reform drawing on the work of fellow Australian Ben Glasson (2013), as a strategy for undoing the discursive antagonism currently evident in terms like ‘green economy’.

The application in this paper of the discourse analysis lens in the context of economic, social and political framings of the green economy is I believe helpful for researchers thinking about the skills, competencies and broader learnings that are necessary to ‘reimagine’ and then also enact social development, environmental protection and economics. It certainly gives me as researcher who frames studies on skills for the green economy, a useful set of ideas to further explore for situating these studies, and informing the analysis e.g. of socio-industrial value chains and skills ‘demand’ analyses.